TOP-7 facts why Russia is a terrorist state

A full-scale attack of the Russian troops on Ukraine that took place on the 22th of February in 2022 is a genocide of the Ukrainian nation, major violation of the human rights and international law norms in the modern history of Europe. The Russian war against Ukraine has been ongoing since 2014.

Murders and terror of civilians 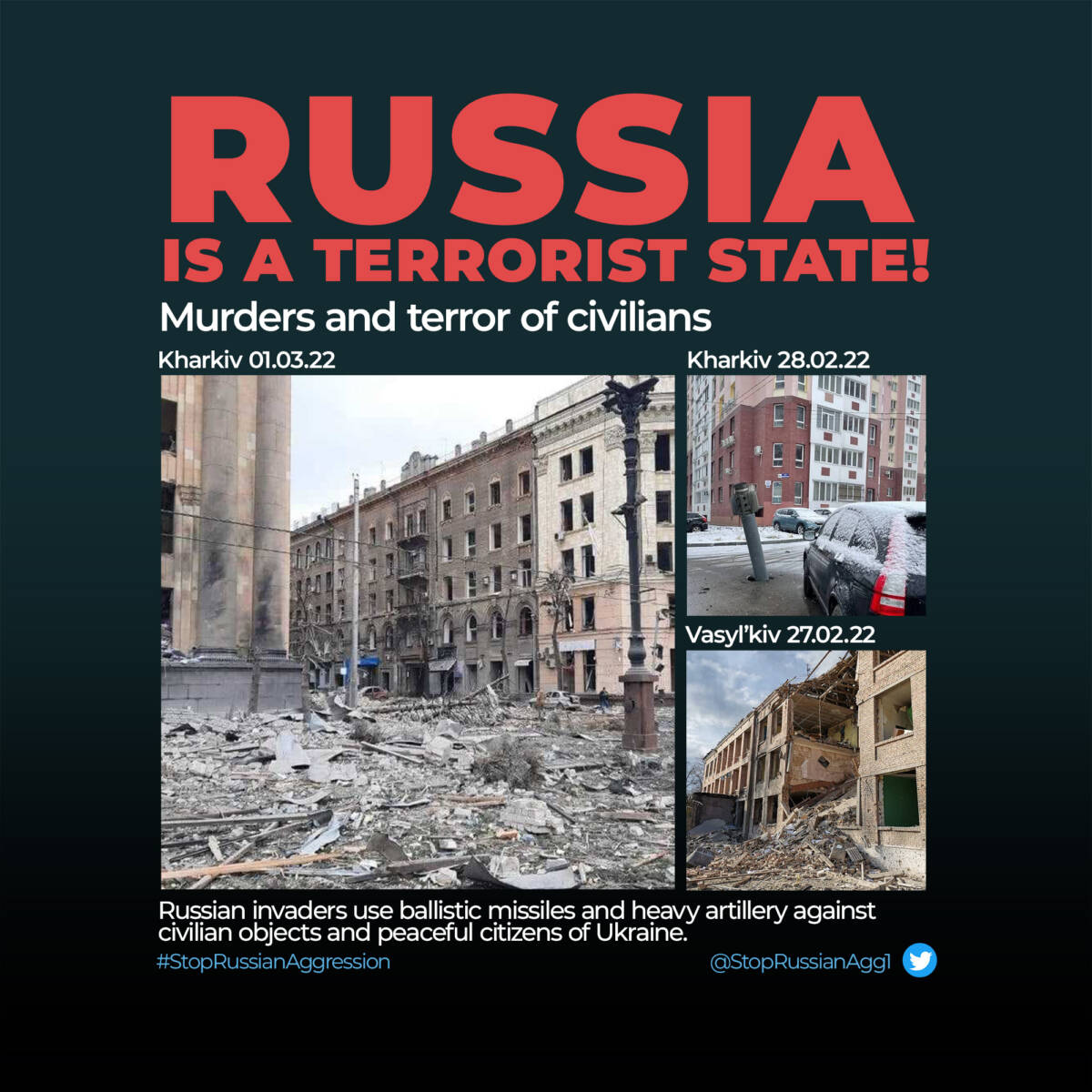 Russia targets both strategically important objects and the civilian population of Ukraine. Children and the elderly are killed in the attacks. Russian troops deliberately use ballistic missiles and heavy artillery against the infrastructure and peaceful citizens in Kyiv and the other 17 regions of Ukraine. Thousands of Ukrainians are forced to flee their homes and relocate to safer regions or abroad.

Russian Armed Forces attack in Okhtyrka hit the bomb shelter and a kindergarten, leaving a number of children severely wounded. Shelling in Chuhuiv resulted into children’s casualties.  In Vyshhorod near Kyiv, Russian war criminals hit an orphanage, but the children were miraculously evacuated. Russian troops used heavy artillery to shell the apartment blocks, destroy the infrastructure, factories and educational institutions, including the military schools for young boys and girls. The scenery of Kyiv is drastically changing.

The Russian Federation blatantly violates the norms of international law outlined in the UN Charter, the Universal Declaration of Human Rights, The United Nations Convention on the Rights of the Child, the Fourth Geneva Convention and undermines the core principles of security in Europe.

Killings of medics and destructions of hospitals 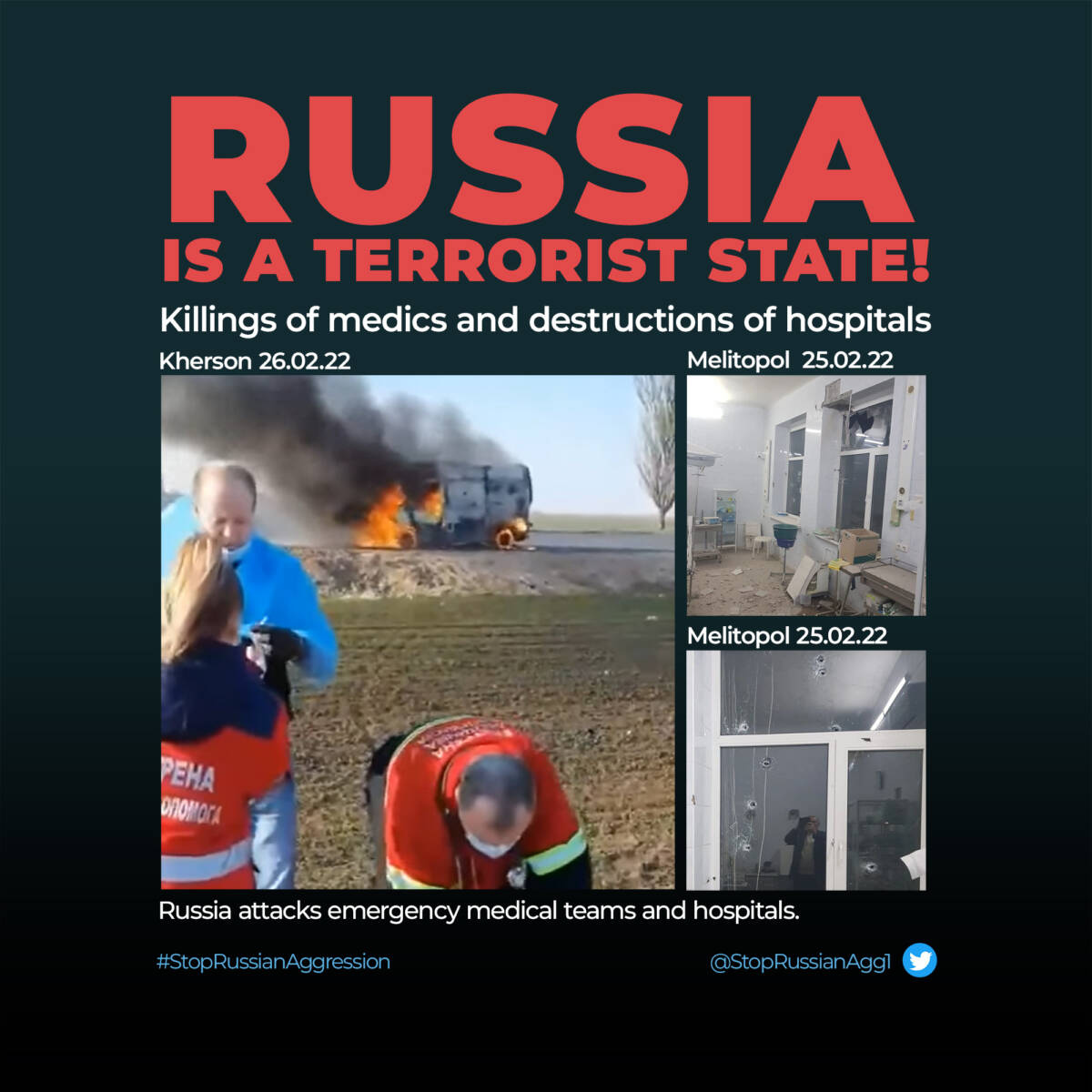 Invading Russian troops aim to cause a humanitarian crisis in Ukraine. Russia violates the rights of Ukrainians to security, medical aid and life. The aggressor halts and does not let the humanitarian missions into the affected areas. Russian troops shell emergency medical teams and hospitals.

February 25th, 2022 Russians attacked emergency medical teams in Zaporizhzhya region and in the north of the Kyiv Region. The aggressor also attacked medics in Chernihiv. February 26th, Russian invaders used artillery and small arms to attack the cancer care centre in Melitopol. This attack caused serious damages to the second floor of the hospital facility, including the operating theatre.

It’s an outrageous violation of Geneva Convention relative to the Protection of Civilian Persons in Time of War. Geneva, 12 August 1949. 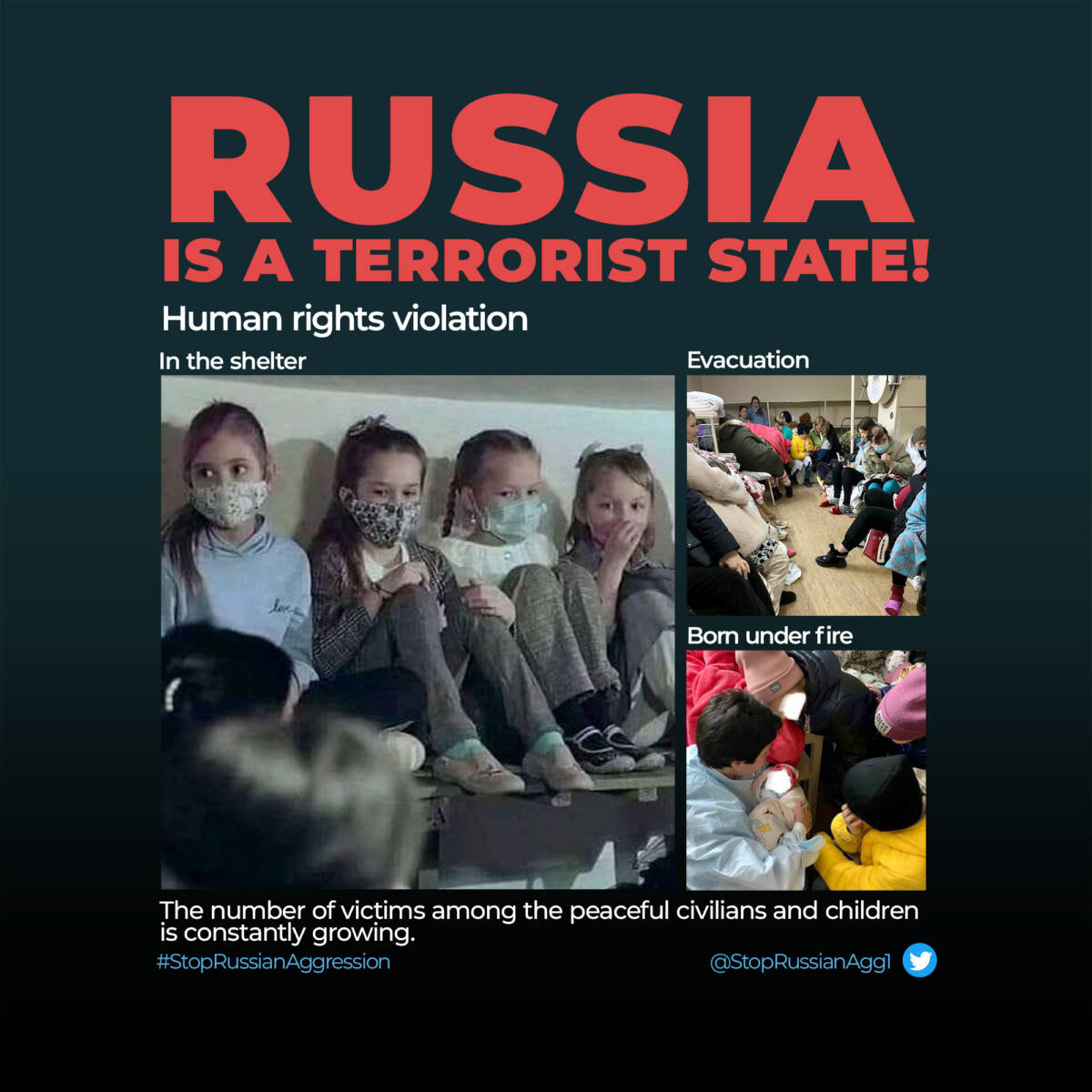 The number of casualties among civilians and children is growing

Russia intentionally targets orphanages, kindergartens, schools, hospitals, residential areas with missiles, Multiple Launch Systems, and air strikes. The number of casualties among civilians, children, and servicemen soars every hour. This is a gruesome violation of the right to life and safety of the residents of cities, towns and villages of Ukraine. 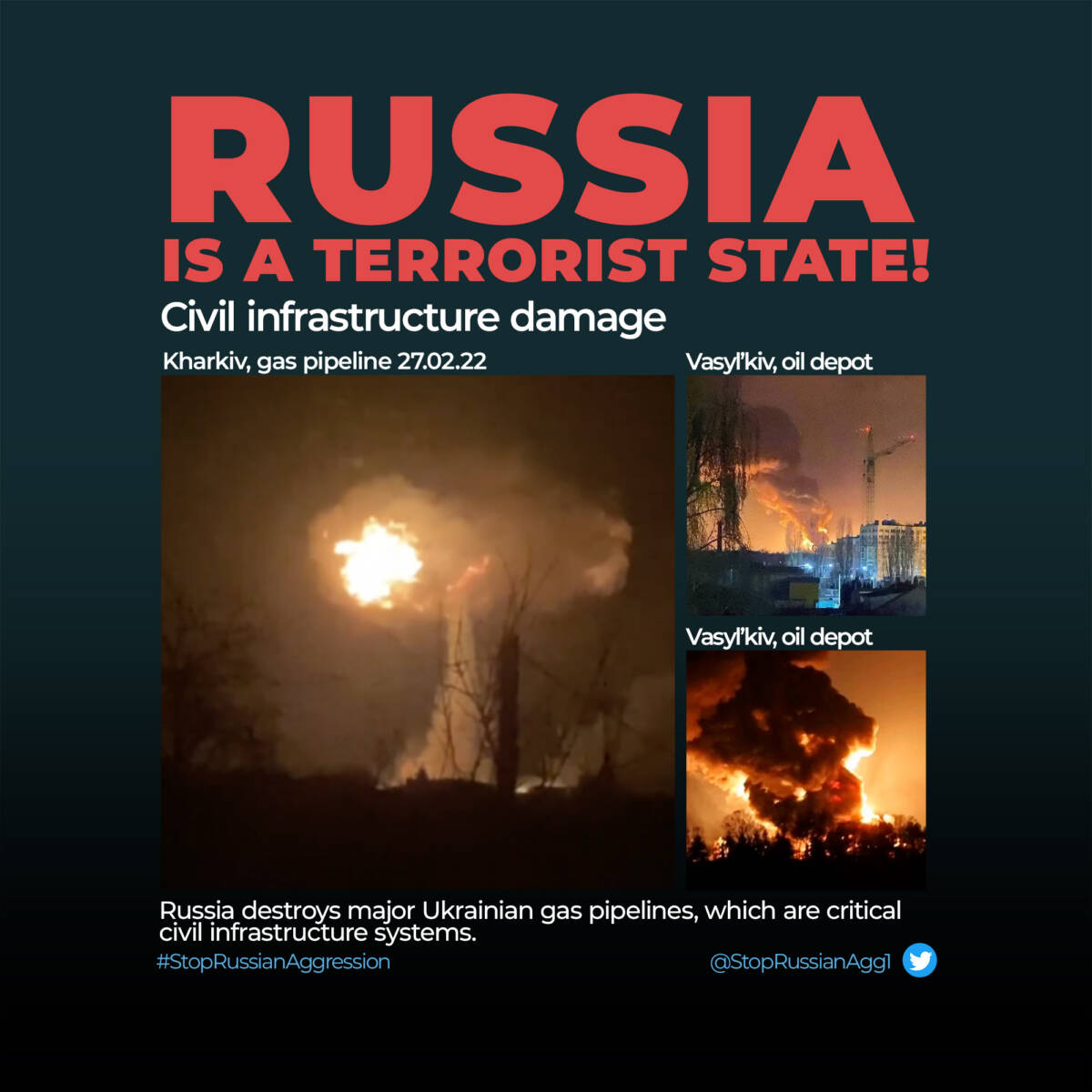 According to Article 48 of Protocol Additional to the Geneva Conventions of 12 August 1949, and relating to the Protection of Victims of International Armed Conflicts (Protocol I), 8 June 1977: the Parties to the conflict shall at all times distinguish between the civilian population and combatants and between civilian objects and military objectives and accordingly shall direct their operations only against military objectives.

Threat to the environment 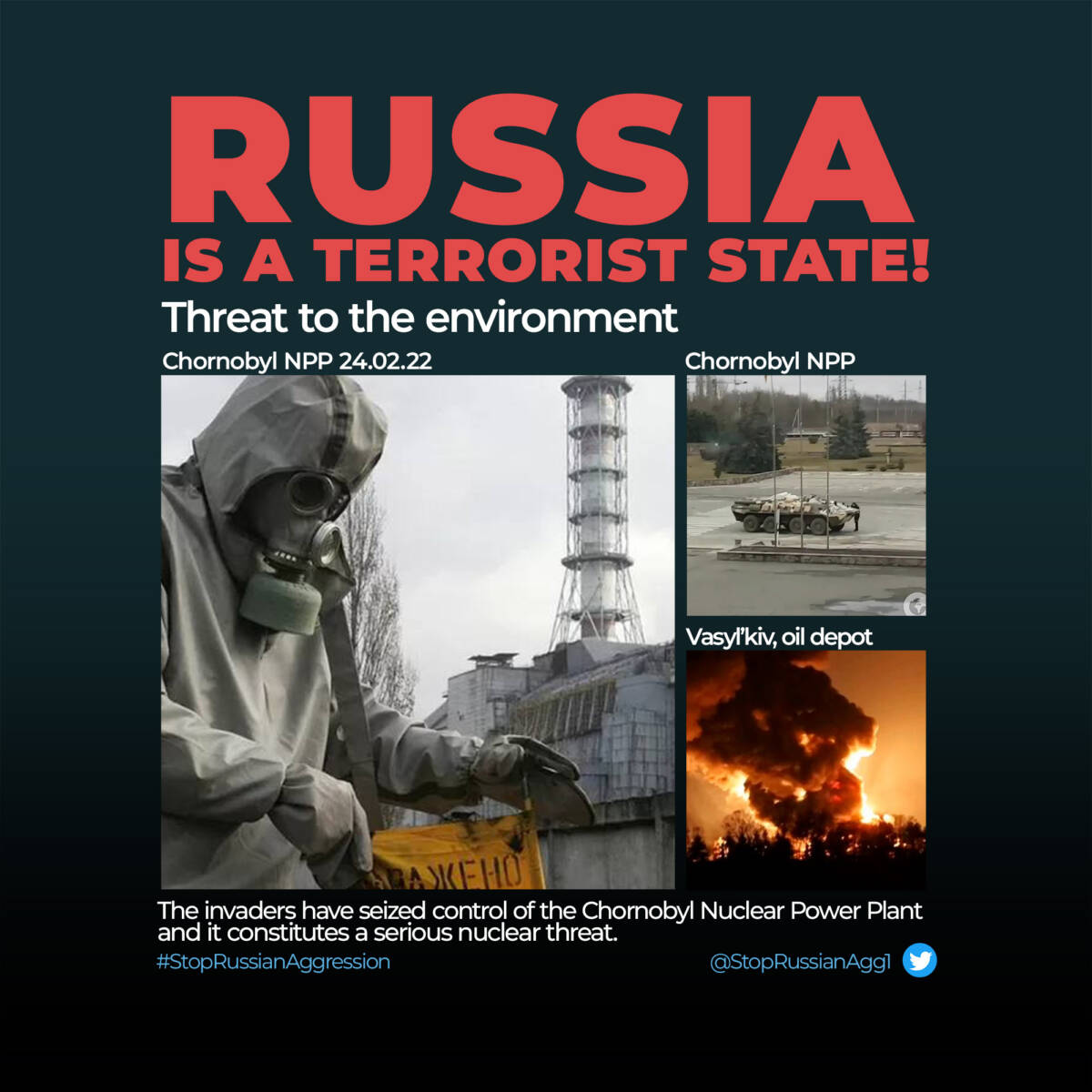 The invaders have seized control of the Chernobyl Nuclear Power Plant, which poses a serious nuclear radiation threat

Actions of the Russian forces violate the basic international law provisions outlined in the UN Charter, the Universal Declaration of Human Rights, the Fourth Geneva Convention and undermine the core principles of security in Europe.

According to paragraph 3 of Article 38 of Protocol Additional to the Geneva Conventions: It is prohibited to employ methods or means of warfare which are intended, or may be expected, to cause widespread, long-term and severe damage to the natural environment.

Murders and injuries of children 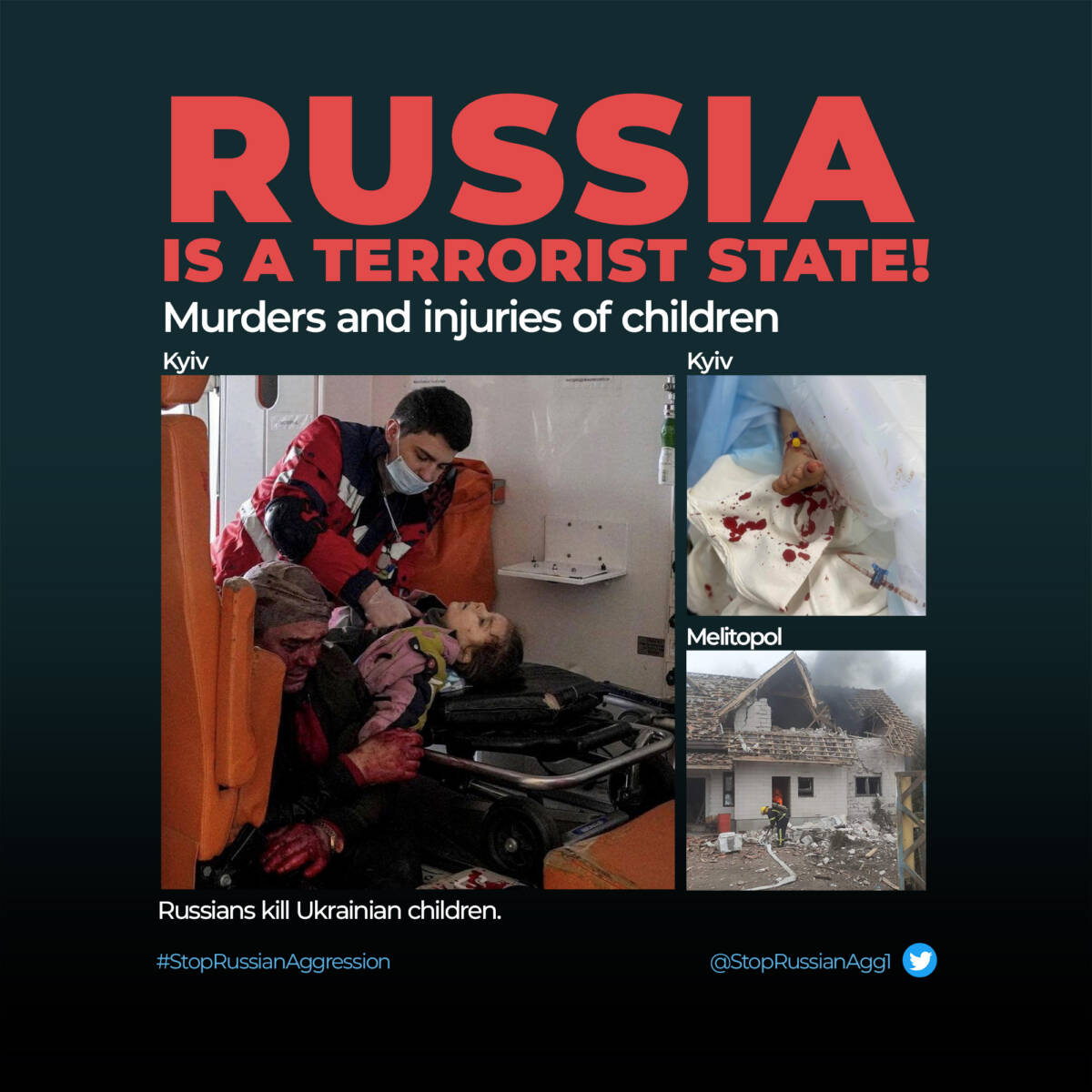 This act of aggression violates children’s rights granted in Articles 6, 16, 38 of The UN Convention on the Rights of the Child and the obligation to protect children affected by armed conflict. 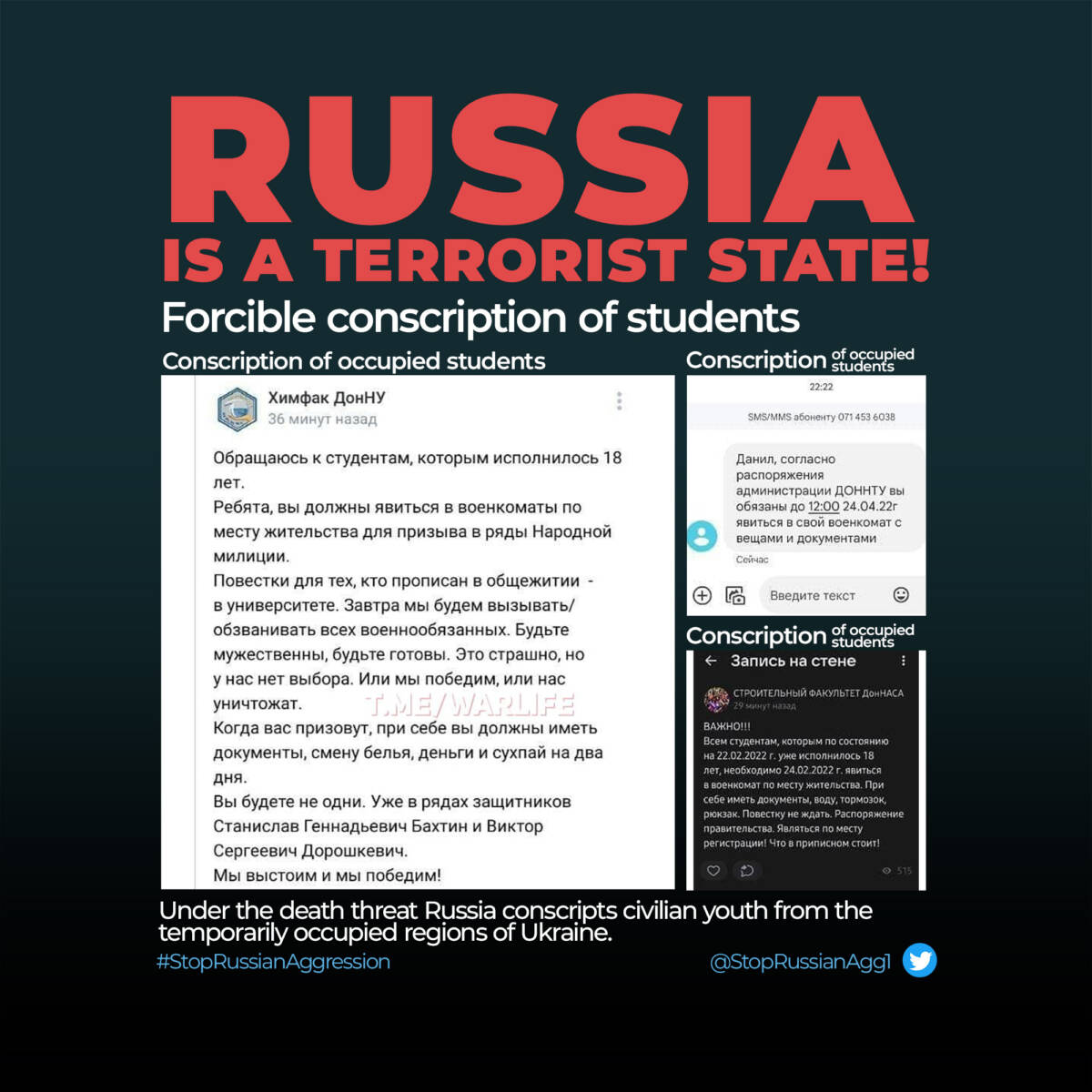 Russia along with the associated illegal military formations conscript students living on the temporarily occupied territories of Donetsk and Luhansk regions. Many of them are underage. Conscripting students and forcing them join the so-called ‘People’s Militia’ while prohibiting them from leaving the temporarily occupied territories directly violates the international humanitarian law.

According to Article 51 of the Fourth Geneva Convention Relative to the Protection of Civilian Persons in Time of War the Occupying Power may not compel protected persons to serve in its armed or auxiliary forces..

Statements of the Russian government about Russian military forces not targeting civilians and civil infrastructure are lies! Russian troops kill civilians, both adults and children, with cynic cruelty. Thousands of Ukrainians are fleeing their homes and relocating to other regions of Ukraine or abroad. Infrastructure, economy and ecology of Ukraine are being destroyed. European and world safety are threatened.

Ukrainians appeal to the world community to condemn Russian aggression, investigate Russian war crimes and help Ukraine protect the eastern borders of the Europe, by meeting the following objectives:

Full membership in the EU and NATO for Ukraine

Exclusion of Russian Federation from the UN Security Council

To the International Court of Justice: recognition of Russian and Belarusian actions as the genocide of the Ukrainian people and making these countries accountable for war crimes

To NATO: closure of the airspace over Ukraine. #CloseTheSky #NoFlyZone

To international companies: prohibition of import and trade of Russian and Belarusian goods globally

To international companies: closure of business facilities in Russian Federation and Republic of Belarus and cessation on exporting goods to these countries

To the governments: cessation of the economic cooperation with Russian and Belarusian private and state-owned companies, in particular in the field of energy resources

To the governments: seizure of the bank accounts and all property of Russian and Belarusian oligarchs, deputies, political leaders and members of their families